This past February at the Northwest Flower and Garden Show in Seattle I bought two South African tree heaths in four inch pots, potted them on, watered well and hoped to see some blooms.  Erica speciosa and Erica canaliculata are both blooming now!

Erica speciosa reportedly is hardy to 20° Fahrenheit, while Erica canaliculata is a bit more tender, listed as hardy to only 30° 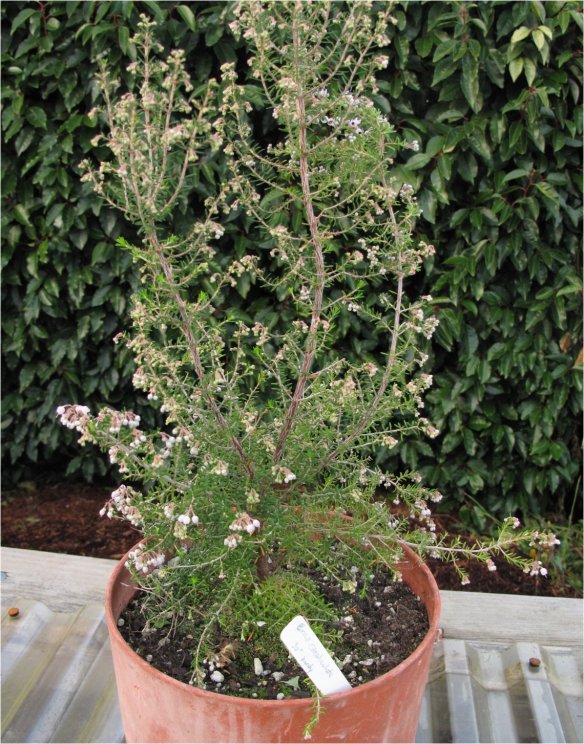 These two plants, from the genus Erica, are endemic (found only in one area of the world) to the Cape Peninsula of South Africa, where apparently over 600 Erica species call home. Up close the blooms are stunning.

I purchased my plants from the Heaths and Heathers’ booth at the show. Their retail nursery is near Shelton, WA, while their main nursery collection is on Harstine Island just east of Shelton:

“We have built the equivalent of a national collection of heather here open to the public.  There are over 800 cultivars in this 3/4 of an acre planting…our personal collection boasts over 900 different cultivars.  Many heathers bloom for several months. Some offer colorful foliage during the winter. On others, the new growth tips are very colorful during late winter and spring. Heaths and heathers range from nearly flat as a pancake to pincushion size to tree heaths. Most are very hardy and are growing in nearly every state in the union. They take minimum care and are drought tolerant once established.”

I definitely plan to visit the Heath and Heather nursery soon.

Further afield, in California, a hillside of a lavender colored E. canaliculata is terribly invasive and threatens the native plants north of the San Francisco Bay.  A cautionary tale, as Bob Sikora points out in his comment below.  Clearly this Erica — endemic to another continent  and hemisphere — was introduced to the hospitable Bay area climate and prospered to the detriment of the native plants.

Above photo © Robert Sikora,  available at CalPhotos – a project of BSCIT , University of California, Berkeley

For more on another potentially invasive plant found widely in the nursery trade, see my post on Rosa rugosa ‘Hansa’ Friend or Foe?