The Genus Lewisia, endemic to Western North America and numbering about 20 species belongs to the small family Portulacaceae, which is characterized by, among other characteristics, fleshy leaves.  Most of the 20 Lewisia species, especially the evergreens, have leaves that are downright succulent looking.

But it is the flowers that have captivated generations of alpine and rock garden enthusiasts since Meriwether Lewis, in July of 1806, first saw the plant in flower at about 3,400 feet near his campsite on the Bitterroot River near the village of Lolo in Missoula County, Montana.

For me pot culture, clay preferably, affords many advantages, especially the ability to have the blooms displayed at eye level. 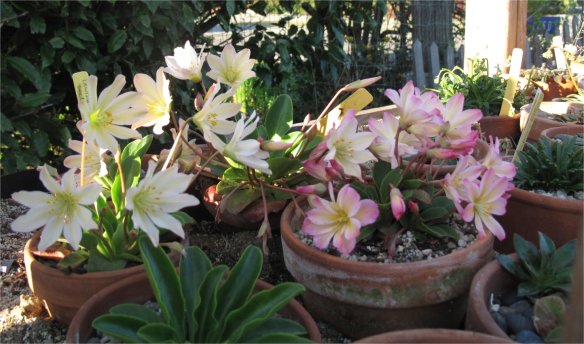 Certainly many folks incorporate L. cotyledon hybrids into the landscape in rock gardens and other beds with excellent drainage. But for me, the simplicity of moving a clay pot into view, and also having the ability in our northwest wet winters to move the Lewisia pots to a drier covered area, heavily favors pot culture.

Lewisia cotyledon is considered by most gardeners the easiest to cultivate and is the species growers have hybridized the most, making its cultivars and hybrids the most visible in general nurseries and  occasionally available for purchase at the big retail garden centers. Nonetheless, even this plant disappoints many novice gardeners when grown in the landscape. While tough as nails with respect to temperatures, cotyledon and cotyledon hybrids prefer some protection from winter wet.

British alpine enthusiasts have been growing and hybridizing Lewisias for decades.  Crosses between L. cotyledon and L. rediviva from Ashwood Nurseries have produced some stunning yellow shades.

An Ashwood hybrid I grew from seed sown in 2010

Rediviva may just be the most stunning species in the wild, with bloom that rivals any Lewisia. It’s distributed widely throughout the West, is very drought tolerant, since it dies back (estivates) in summer, presumably in response to dry conditions.

In cultivation during its active growing period in early spring rediviva tolerates saturated soils, though I recommend clay pots with excellent drainage or plunging pots into a sand bed. Watering the sand bed sparingly, especially during dormancy, is helpful in keeping rediviva happy.

I’m hoping to successfully grow most, if not all, 20 lewisia species. My goal is to be able to display the entire genus and also experiment with various crosses.  Right now I have the following species in cultivation:

I’ve loved this particular plant for many years and for many reasons, but blooming in October is a first. Lewisia cotyledon is one of the most variable species in the small Genus Lewisia (about 19 species).  It hybridizes readily with most of the others in the genus.

Based on the tight, compact rosette and the lack of serration of the leaf margins, I would say this plant is closely related to L. cotyledon var. purdyi, which is native to the Siskiyou Mountains of southern Oregon, particularly the upper reaches of the Illinois River Basin.

Cotyledon is the species of Lewisia that enabled the plethora of colors and strains of Lewisia seen widely in the nursery trade today. In his Timber Press book on Lewisia, published in 2000, B. Leroy Davidson noted this success:

“A vast range of cultivated variants are now convened [named] merely as cotyledon hybrids (that is to say, hybrids involving L. cotyledon)… Indeed, L. cotyledon has been made so amenable to commercial cultivation and so showy that garden centers now feature big displays of plants in gallon containers, bursting with flowers of strawberry, raspberry, cherry, orange, lemon and lime.”

The plant blooming now is one of many of my clones;  vegetative propagation is easy from offsets of small rosettes that form off the caudex of the existing plants. I purchased the mother plant in the 1980s from Herb Dickson’s Chehalis Rare Plant Nursery. While not as flashy or spectacular of color as those aforementioned hybrids, it still is a fine specimen.

This cultivar is always a repeat bloomer through the summer.  The trick is to keep the conditions as spring like as possible. Most of my plants are in pots and it’s easy to keep them cool and fairly wet after the initial spring blooming by moving them into shade.  Pulling off the spent flower stalks also encourages multiple rounds of blooming, but never as late (until now) as mid October.

I’ve propagated my collection — currently about 100 plants — from seeds I purchased from Ashwood Nursery in England, offsets, and from natural crosses that occurred between plants on my sand plunge bench.

After blooming, the spent flower stalks scattered seeds both in their pots and the surrounding sand. This year it was easy to pluck these random “bench crosses” out for potting up.

2013 Lewisia cotyledon crosses potted up for growing on

I doubt if I’ll see much bloom this coming spring, but some of the seedlings do seem more robust than others and variation in the leaves is already apparent.

Since about a third of the plants were the “Ashwood” strain from England, which rivals any strain for stunning color, I’m anticipating these crosses may yield some worthy cultivars.